While business at the bath ceramics manufacturer Duravit was booming, so was its document volume in the company. When the electronic legacy archive had reached its functional limits, Duravit decided to switch to a modern enterprise content management (ECM) solution with an archive and eRecords. Since the switch, the new ECM system supports the international expansion of the company in all of its areas with its multilingual and cross-location availability.

Regardless of whether it's a whirltub or exclusive bathtub with a built-in sound system – if you are looking for premium bath products with a modern design, just go to Duravit. The company based out of Hornberg in the Black Forest is not only an innovative product designer, it also a specialist in what it calls "living" bathrooms.

Coinciding with the continual expansion into 120 countries, the number of documents in the company network rose dramatically over the years. By 2010, the former archive system had reached its limits and was no longer able to cope with the growth. Moreover, the existing system was not international enough, which would have eventually led to problems during the expansion period in the document-based, cross-location business processes. For these reasons, the bath ceramic specialists decided in 2011 to look for a more modern and sustainable alternative.

In the search for a more modern ECM solution, Duravit placed special value on the secure and efficient migration of the legacy archive, on the set-up of a record structure with an authorization concept, and on the internationality of the new ECM software for worldwide deployment. There was a clear strategy for selecting the right vendor. "It was important for us that we chose a German vendor with strong in-house software development capabilities that would fulfill European legal requirements," comments Application Manager (Finance) Werner Höltl. Duravit decided in favor of the Doxis4 iECM suite by SER with its comprehensive functionality and multilingual capability.

First the migration, then eRecords

When the new ECM solution was launched, Duravit started out by migrating legacy documents, as Werner Höltl describes: "We realized ahead of time that several million documents couldn't be migrated just like that." SER had an effective and proven migration concept for the legacy data migration to Doxis4. About 20 million documents were successfully and securely migrated step-wise during operations.

In 2012, the electronic customer records were connected to the ERP system Infor. The goal was to significantly improve communication efficiency between the national and international departments and increase the availability of information across locations. Up until then, communication processes between locations, primarily via phone and email, were time-consuming. Most of all, there were a lot of requests coming from throughout the sales areas. For example, the contact person from a subsidiary wanted Duravit's sales team in Hornberg to send the original documents for current deliveries via email to his subsidiary. Since certain documents existed partially only in paper form, this request could only be fulfilled with a high amount of manual searching and communication. "We also had the problem that the old archive didn't have a sufficiently detailed authorization concept set up among or within the subsidiaries, e.g. in the individual sales areas," explains Höltl.

The electronic customer records in connection with the ERP system Infor provided the necessary structure. As the documents (over 5,000 per day) and index values are transferred from the ERP system, the customer record is basically automatically filled and filed in an audit-proof manner. What's more, Duravit's employees have the practical option of manually filing selected documents, e.g. Excel table or email correspondences, using the Doxis4 modules SmartOffice and SmartNotes from the familiar Microsoft/Lotus Notes interface. They simply drag and drop the document into the respective customer record.

In addition to the electronic customer records, Duravit introduced the electronic supplier records in 2015, which are also connected to the ERP system. The record system was rolled out worldwide at the start of 2016. The supplier record documents the entire lifecycle of a business relationship with a supplier. Orders, order changes, on-call orders or also delivery notes are bundled in a record. They are available in the ECM system in any location. Since the launch, the purchasing teams at the international Duravit locations have been working with the same up-to-date level of information.

With the two electronic records, the employees from sales and purchasing have worldwide access (if authorized) to all business documents of a customer or supplier. "Aside from the higher level of accountability, communication between our international locations and the headquarters in Hornberg has become considerably more efficient," remarks Höltl positively. The next step is to launch further record solutions in the areas of quality management (QM) and product management (PM). Both record structures will contain version management and a release workflow within Doxis4.

In the future, Duravit plans to launch audit-proof archiving in Doxis4 of EDI data from the Seeburger BIS system. Up until now, they have been saved on one server, visible only to the IT department. Special requests – e.g. gold-plated handles or faucets – are noted in EDI orders, but they are sometimes missing from order confirmations. Consequently, customers ask their service supporter what happened, who then asks the IT if the special request was documented in the original EDI or if there was a mistake in the data transfer. It's a complex and time-consuming process. By setting up EDI data archiving in the central ECM system, however, the service supporter can directly access the archived EDI document and verify the special request.

For many years now, Bärbel Heuser-Roth has been dealing with a wide variety of ECM topics, from information logistics, process management and compliance to the use cases of intelligent processes for automated information management. She has also spent her career researching and writing about the implementation of ECM projects at companies and organizations. 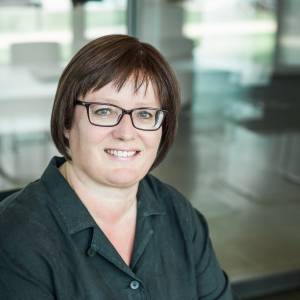