Is Blockchain disrupting ECM or is it just hype?

Blockchain is an omnipresent topic these days and has extended its reach from an alternative payment system in the form of e.g. bitcoin to a concept that, according to current discussions, might be disrupting the entire IT landscape. But is blockchain a universal remedy to enhance (cost) efficiency, security and autonomy? How do the new possible applications affect ECM and content services? Are we soon all blockchaininginstead of managing content?

In brief: The concept of blockchain

Wikipedia describes blockchain as “a distributed database”, also called distributed ledger, “that is used to maintain a continuously growing list of records, called blocks. Each block contains a timestamp and a link to a previous block.” In their essence blockchains are generally resistant to alterations, due to the consensus mechanism, where at least more than 50% have confirm the alterations. This makes blockchain a secure, verifiable and permanent solution for transactions of any kind. Originally implemented as the core of the digital currency bitcoin, it now sees several possible use cases, e.g. around records management. Currently, the Swedish land registry is trialing blockchain for its land registration. Here, all steps of the contract between buyer and seller are confirmed and saved in the blockchain. The related information is also accessible by the land registry and involved banks, aiming to make the land registry a transparent, trustworthy and secure Transaction.

ECM and blockchain – a high-level comparison

Though blockchain is seen as a self-auditing ecosystem that is highly secure, the two essential paradigms of public blockchain as known today – namely the absence of a central authority and anonymity or better pseudonymity) – conflict significantly with some of the current fundamental ideas of running a business. As ECM in itself presents a solution to support companies in managing their business, its main purpose is to make sure information of any kind is managed efficiently and in compliance with current legislations, e.g. GDPR, and company policies.

In general, ECM and blockchain currently follow two quite different approaches, not only technologically but also in its views on Business:

An ECM system is based on traceability and the option to monitor activities via an audit trail to comply with corporate rules and legislation. Moreover, GDPR even requires traceable deletion of personal information. In a system based on anonymity (coming from a public blockchain) data is said to be protected by this anonymity. Here, traceability has a form that differs significantly from the traceability understanding of ECM. In a blockchain the saved blocks with their transactions are traceable, but they cannot be attributed to an individual. And that’s the crux of the entire story: a whole different perspective of something described with the same word. What’s more, public blockchains do not allow for deletion or modification of the blocks and ultimately the blockchain, making it a rigid system where new information needs to be stored in new blocks. Private blockchains may solve this issue by loosen the anonymity and implementing deletion policies via consensus validation.

Apart from traceable deletion, compliancy and legal obligations require an immutable “original” – this is something blockchain can provide – as immutability is a cornerstone of the concept. But, once it comes to editing or deleting content, the concept of blockchain is not able to replicate these actions. New information is stored in new blocks extending the chain. The former need to be confirmed via the peer-to-peer validation process – a timely and energy consuming process. Regardless of the change, may it be as minimal as adding a comma, the validation process needs to be executed.

2. Data security vs. public accessibility of information Originally, the concept of blockchain is based on an open, public approach with peer-to-peer verification at its best, meaning that public blockchains are completely public and fully accessible. Their value arises from the multitude of parties involved in the verification process.

In ECM data security and data privacy are key. It prevents or reduces the risks of data leakage to a maximum, keeping all sensitive data inside the company – and that for a reason: Most companies are still afraid of industrial espionage or data leakage. Thus, the majority of ECM installations still run on-premises instead of the cloud. As blockchain is such a new and different concept, it is probably way too early for such a mind shift on a broader level.

In regards to security and privacy private blockchains have become more popular over the past few years. They mark a hybrid state while diluting the original idea of blockchain. Private blockchains come with “extras” like access permissions and restrictions and allow administrators to modify – even to the extent of permitting deletions – the block and the blockchain itself. This may be the future of commonly used blockchains.

When running a content management solution companies aim at data security, compliance and sovereignty. This goes hand in hand with a central, internal administration of the solution itself and the user and data management. The blockchain comes along with a completely different concept: all validation and confirmation of transactions is done via distributed ledgers in an automated way. The user management as we know it is basically not possible as transactions are not connected to individual user profiles.

Looking at the way blockchain is validating transactions it uses a so-called “proof of work”. Here, the nodes of a blockchain network compete to be the first to validate a block. On a side note: In doing so, new blocks are mined. This is quite an extensive process, which ultimately results in blocks being condensed to a chain – a sequential chain, which has to proof its abilities of scalability with growing database.

All modern ECM systems are easy to scale and can process files and data quickly. The confirmation that content has been filed, updated or deleted is right at hand.

Is blockchain changing the essence of ECM sometime soon? Or is it even a new backbone technology?

Some see blockchain already as revolutionary as the internet, when it emerged. Quite possible, as it is a whole new perspective of looking at technology. Like the internet – before it became mainstream – the concept of blockchain seems hard to grasp. Though, certain use cases arise that allow a glimpse into its future. But are these use cases relevant, revolutionary or disruptive for ECM? And if so, is everyone affected to the same extend?

Blockchain is for sure a revolutionary concept and I believe it will disrupt software offerings to a certain extent for sure. At the same time, ECM use cases will be affected in different levels. Let’s take the classical archive approaches. Here blockchain currently looks like the less efficient option: An extensive amount of files, documents and data slow down the blockchain and make archiving scenarios too slow for a seamless and user friendly solution. Moreover, it is currently not possible to shift all data and content to blockchain as capacities are not there yet. At the moment, blockchains only carry out transactions of representations. But maybe this can change in the future too. All case management scenarios that involve multiple players and different confirmation and validation levels with limited data volumes, e.g. in logistics or in the insurance industry, may be revolutionized to a certain extent, integrating blockchain mechanisms and adding value to existing models.

And though blockchain currently does not comply with many content management requirements (see above), I see future opportunities to enhance ECM with blockchain concepts to create an advanced content services ecosystem that benefits its users and complies with legislation at the same time. My vision of a blockchain-enriched content platform incorporates the following:

All this can enhance the existing content services to innovate a more efficient, user-friendly and secure content management system. The strength of an ECM solution like Doxis4 is its ability to integrate with other solutions – in the future I surely see blockchain elements being part of this development, that offer added value to all participants.

Hey there, in my role as an International Communications Manager, I juggle analyst relations along with several international teams, PR and marketing projects for the SER Group. I am excited to share all our activities across the globe with you. Prior to joining SER, I held several marketing and communications positions at an international affiliate marketing network, where I worked 9 years. My other passion, good food!, started with a college job at a popular Berlin restaurant and hasn’t stopped yet. I try to explore the culinary highlights of Berlin and any other place I visit whenever I can. 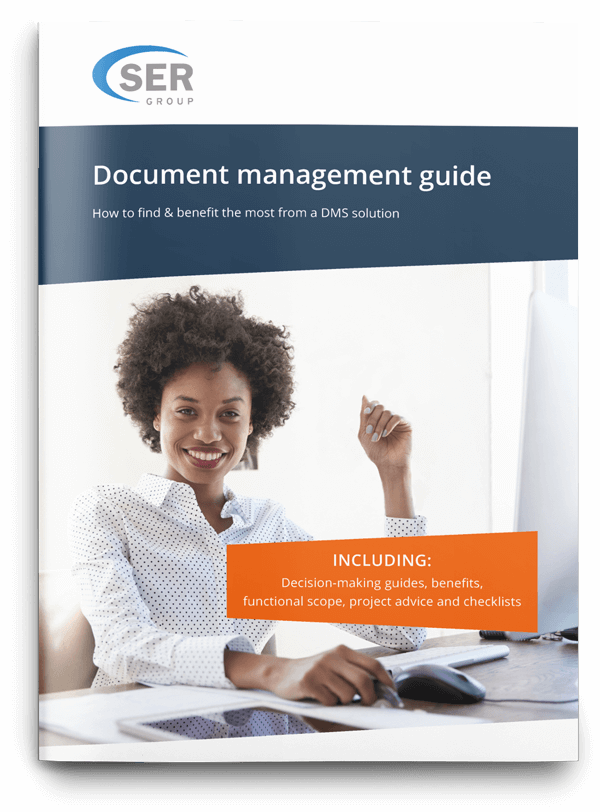